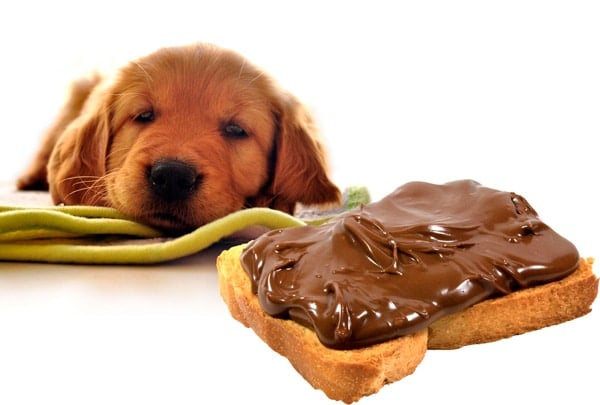 There are many ways to feed our dogs – those little fur balls who brighten our day are always hungry it seems. From natural diets like the BARF Diet, which consists of feeding your dog with natural foods (raw meat, vegetables, etc.), to diets based on leftovers of what we eat, not to mention the not recommended but widely used commercial dog foods.

We call them “diets” but not in the literal sense; it’s not a nutritional program to help the dog slim down, but a nutritional plan to make sure he is properly fed. And although we all know that dogs have been fed with table scraps for many years, there are foods that we humans eat regularly that are extremely harmful for dogs, known as foods that are toxic to dogs. 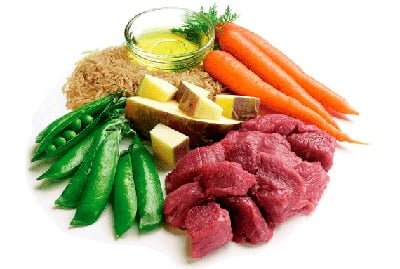 Let’s look at the most common and dangerous foods that are toxic for dogs – forbidden foods – keeping in mind that not all of them are necessary fatal, but are toxic in large quantities for our dogs. Depending on the size of your dog, the amount of harmful food he ate and his tolerance, he may have reactions that are more or less severe. Not all dogs react the same way to the toxins in these foods, but they are harmful for all dogs in large amounts. 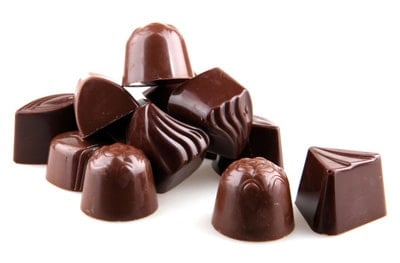 Foods that are harmful to dogs: Chocolate

Chocolate in any form is a very dangerous food for dogs. It doesn’t matter whether it’s a chocolate square, bonbon, yogurt with chocolate or any type of sweet that contains chocolate – all foods, every single one, that contain chocolate, cacao or byproducts are very harmful for dogs.

Chocolate contains a toxin called theobromine which is harmless for humans but very toxic for other animals, including dogs. The toxin is found in the actual seed of the cacao plant, where chocolate comes from, which is why there is no type of chocolate that is free of this toxin.

Although dogs might seem to love chocolate, it is really dangerous for their health. The wrong amount can cause convulsions, accelerated heart rate, diarrhea and vomiting, and even death. 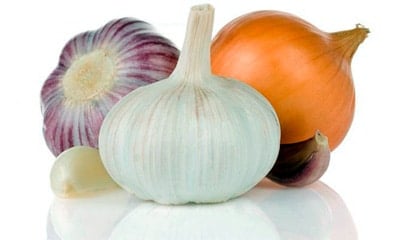 Foods that are harmful to dogs: Onion and Garlic

Both onion and garlic are very toxic foods for dogs. It doesn’t matter if they’re raw, cooked or dried (spices), they’re just as toxic for your dog. They contain sulfoxides that are extremely dangerous for dogs, causing serious anemia and destroying their red blood cells. It can also cause kidney deficiency and a whole host of serious problems.

Although it’s true that they need to ingest large quantities to experience severe problems like death, some are susceptible to simple powdered versions of these foods. It’s possible that some prepared foods (dog food, Yum diet, etc.) will contain garlic or onion in their ingredients; normally they are used in very low quantities as a natural food preservative, but it’s not recommended at all for our dogs.

When a dog eats onion or garlic, he doesn’t get sick right away. It’s even possible for four or five days to go by before he shows the first symptoms. You’ll also be able to notice that the color of his urine changes to orange or reddish, which is evidence of ingesting these foods that are so harmful for them.

In general, dogs don’t like raw onion, but when you feed a dog with scraps or certain dog foods… it’s possible that you’re feeding him these dangerous toxins without even knowing. You have to be careful. 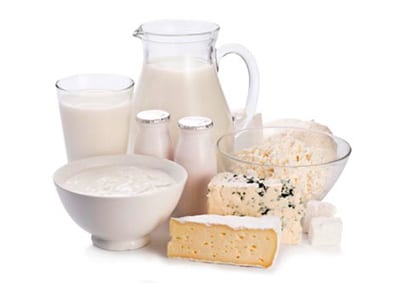 Foods that are harmful to dogs: Dairy

The vast majority of dairy products are harmful for dogs because they contain lactose. Lactose is basically a natural sugar found in milk that is assimilated in the human body thanks to the enzyme lactase. Dogs stop producing this enzyme when they are just a few months old, which is why they aren’t able to digest the lactose in milk or its byproducts, causing serious damage to their digestive tract.

If your dog drinks milk or eats dairy products with lactose, he will have diarrhea, stomach pain, gas, vomiting or serious related digestive problems. That’s why it’s important to avoid giving your dog these types of foods, especially since they usually like them a lot.

Not all dairy products are harmful: Plain, unsweetened yogurt doesn’t contain lactose, since it was consumed by the lactobacillus bacteria that are naturally found in yogurt. Plain yogurt is actually beneficial for dogs, since it provides good levels of calcium, magnesium and protein, among others.

On the other hand, cheese is not recommended for dogs, since it isn’t always thoroughly fermented/ripened and can contain lactose. 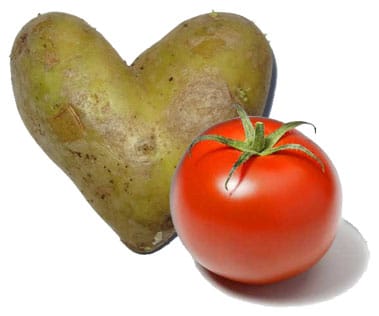 Foods that are harmful to dogs: Potato, Tomato and Avocado

Although these foods are very healthy for humans, they are highly toxic for dogs. They should never eat them, not raw, not cooked and not in any other form, since they can quickly poison your dog.

Tomatoes and potatoes contain oxalates and “glycoalkaloids”, while avocados contain “persin”. If your dog eats any of these foods, he’ll most likely suffer from digestive and urinary issues, plus respiratory abnormalities and could even go into a coma.

No doubt your dog starts licking his lips whenever he sees you frying potatoes, cooking with tomato, cutting up avocado for a salad… But remember that just because something is good for you, doesn’t mean it’s good for him. Don’t be the reason he gets sick by giving him the wrong foods. 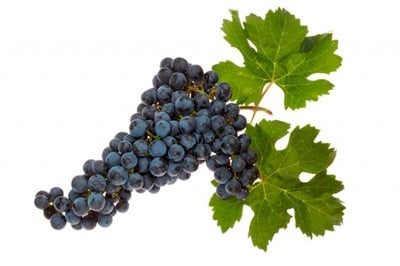 Foods that are harmful to dogs: Grapes and Raisins

It’s not known why grapes are toxic to dogs, although it is being studied because it has been clearly demonstrated that they are extremely harmful for them. Eating just a few grapes can cause severe kidney deficiency in your dog, which could kill him.

In the past, they used to reward dogs with raisins as treats, as we do today with doggy biscuits or pieces of sausage, but since then it’s been clearly shown that this isn’t a good idea. Even if your dog has eaten grapes without experiencing any problems, don’t risk giving them to him again because no dog is immune to the toxins in this fruit.

Obviously it’s also a bad idea to give them raisins or grape byproducts, since they contain the same toxins for your dog. 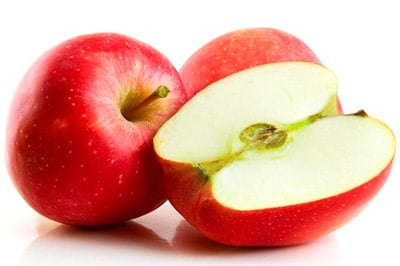 Foods that are harmful to dogs: Apples, Plums and Fruits with seeds

Apples, plums, peaches, persimmons and many similar fruits can be very harmful for our beloved pets. The fruit itself isn’t harmful – in fact, it’s even recommended – but the pit or the middle part of these fruits, where the seeds are, are highly dangerous.

The seeds of these fruits contain small amounts of cyanide, which humans can assimilate (in small quantities), but dogs cannot. The cyanide isn’t the only problem with these fruits; the pits from plums or peaches can cause intestinal blockages that can kill your dog long before you can even detect them.

A dog poisoned by seeds with cyanide can show severe symptoms like hyperventilation, convulsions, serious breathing problems and even death.

Foods that are harmful to dogs: Liver

Liver contains high levels of vitamin A. This vitamin isn’t harmful in the right amounts, but dogs can’t naturally assimilate levels as high as those found in liver.

It can be fed to dogs in small quantities very infrequently; it should not become an everyday food. It is used in natural food diets like the BARF diet, although in general it’s better to serve it cooked rather than raw, just like with eggs.

A dog with excess vitamin A can experience anorexia, bone deformation and even death. 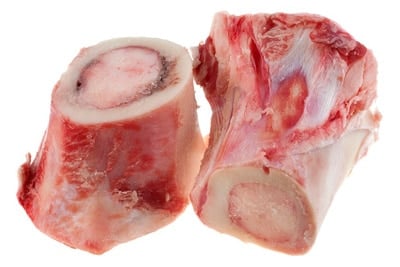 Foods that are harmful to dogs: Bones

Many people think that bones are very healthy for dogs. After all, they’ve eaten them their whole lives, and nothing happened… but they couldn’t be more wrong. The only bones that dogs can eat are meaty bones, like chicken carcasses, wings, thighs, pork ribs, etc., and they must always be completely raw – never cooked. Cooked bones splinter when chewed and can pierce your dog’s throat or digestive tract, something that can even kill him.

Other bones that dogs can eat are the big, hard, round bones, like beef knee caps.
Never give your dog cooked bones or the wrong type of bones, only soft, meaty bones or beef knee caps. 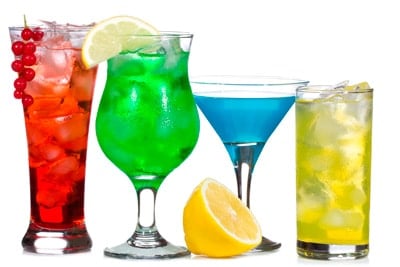 Foods that are harmful to dogs: Alcohol

We don’t know anyone in their right mind who would even think of giving alcohol to their dog, but many people will joke about it. A little beer or wine to see if he likes it, or if he gets a bit drunk… These are jokes that you should never go through with, because alcohol is a very strong poison for dogs.

In medium doses, it can put your dog into a coma or kill him. It’s not a joke – dogs cannot have alcohol. 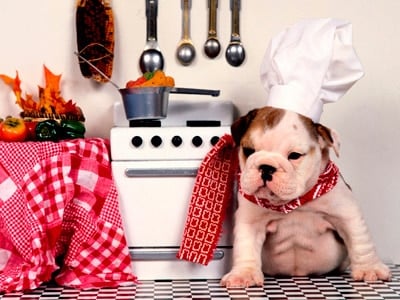 Other foods that are toxic for dogs:

These are the common foods that are most dangerous for dogs, but they aren’t the only ones. It’s important to always be sure of what you feed your dog because, as we said, what’s good for us isn’t necessarily good for our dogs.

How to Make Ice Cream for Dogs

The Huge Lie about Dog Food